In 1857, the North American Medico-Chirurgical Review published a critique of a microscopy handbook written by the British physician and microscopist Jabez Hogg. The journal criticised Hogg’s publication for copying entire paragraphs “verbatim et literatim” from an American microscopy manual, Joseph Wythe’s The Microscopist (1851). Although the anonymous reviewer admitted that every microscopy handbook was, to some extent, a compilation of previous works, Hogg was attacked for plagiarising Wythe’s book without even mentioning it as his main source – “a Hogg-ish proceeding certainly.”1

The North American Medico-Chirurgical Review was not the only journal to voice such criticism. Reviewers of microscopy handbooks often exposed and condemned plagiarism. Since international copyright laws were only enforced after the signing of the Berne Convention in 1886 and the passing of the American Chace Act in 1891, the mid-nineteenth-century periodical press and book trade thrived on reprinting material. And some editors publicly defended copy-and-paste practices, arguing that carefully selecting and recombining articles was the true art of editing. Edward Pennock, editor of the Philadelphian Microscopical Bulletin and Science News, outright declared that he could “write much better articles with the scissors than with the pen.”2

As a result, microscopy texts and illustrations travelled between books, periodicals and trade catalogues. Illustrations published in a religious work on microscopy, testifying to the beauty of even the most minute of God’s creations, were reprinted alongside medical illustrations. Likewise, an extract from a textbook for students of biology could appear next to a lively account of infusoria living in a microscopist’s garden pond. Often, microscopy texts and illustrations were adapted to target different audiences. Editors shortened texts, added chapters or prefaces, had photos reproduced as engravings or multiple illustrations combined into one. By the time the North American Medico-Chirurgical Review published their scathing review of Hogg’s microscopy manual, the frontispiece of Hogg’s book had already reappeared in a German publication. 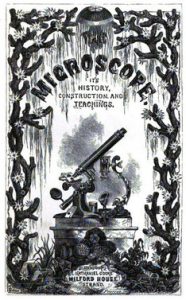 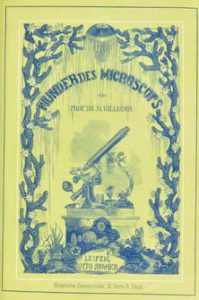 The Worlds of Wonder Zooniverse project aims to reconstruct the travels of nineteenth-century microscopy illustrations by tracking their reproductions. It builds on the idea that circulating illustrations were a vital factor in the formation of a microscopy community in the nineteenth century. Microscopists were an exceptionally diverse group ranging from amateur and professional scientists in various disciplines to opticians, engineers and medical practitioners. There is reason to believe that the success of microscopy publications depended on their ability to address their readership by combining texts and images which, on their own, would have been relevant only for subgroups within the microscopy community. By reconstructing the routes microscopy illustrations took and documenting the changes they underwent on their way, we hope to better understand strategies of community-building in nineteenth-century science, technology and medicine.

We invite you to join our research team on Zooniverse and help identify and classify microscopy illustrations. Identifying the content and contributors of these illustrations will allow us to get a better idea of who was involved in the nineteenth-century microscopy print trade and to find and analyse reproductions of illustrations. We look forward to meeting you all and having a great time researching microscopy books, periodicals and catalogues together!

Worlds of Wonder on Zooniverse