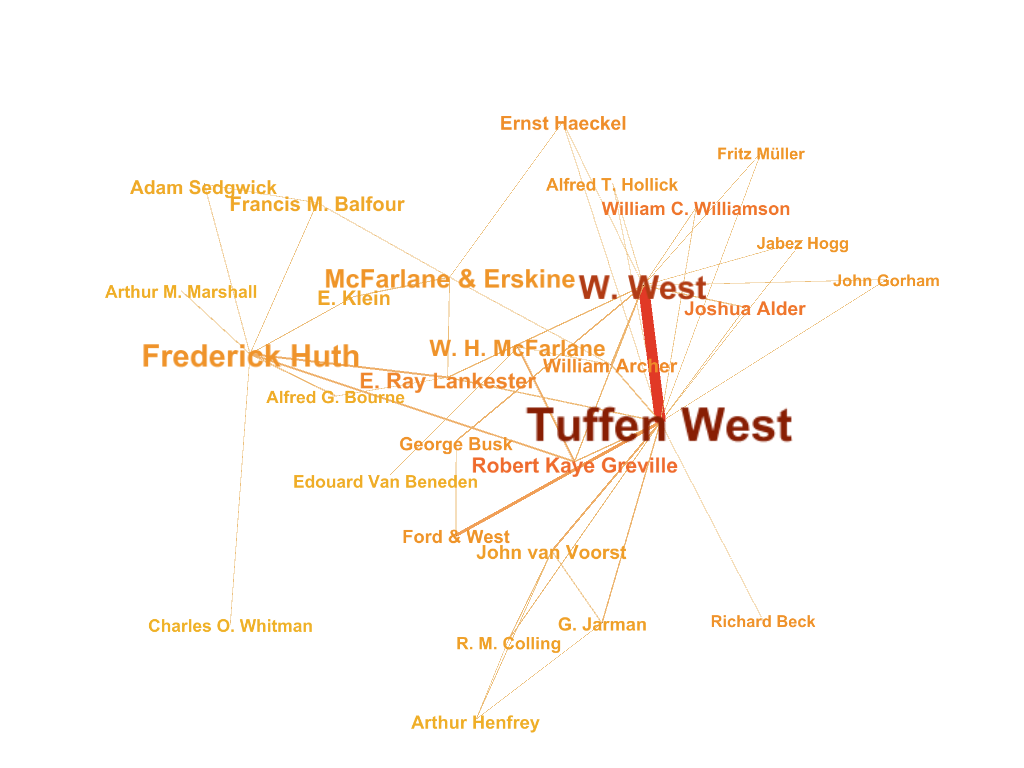 While you were busy collecting data in the Zooniverse, we started to aggregate and clean the data, so it could eventually be used to visualise the number and type of illustrations in a publication, as well as networks of illustrators. We were lucky to get a lot of help from Pmason, who wrote numerous Python scripts to analyse our data, and we thank him for that. Now, it’s time to finally meet the illustrators, engravers and printers of the illustrations you’ve been looking at!

The network above this text draws on the data you collected. You deciphered and transcribed the handwritten texts scribbled above or below illustrations, which often contained the names of the people who made the illustration. The network shows the most prominent collaborators, the people who worked together on illustrations – most often the illustrator, engraver and printer. The bigger and darker the name, the more often this person appeared as collaborator. Thick and dark lines connecting people show that they produced a lot of illustrations together. Printers worked with several engravers and illustrators, so many of the bigger names belong to printing houses. The Database of Scientific Illustrators has information about most of the people in the network (and the rest will be added by us soon), so you can consult the database if you want to find out more about them.

As always with data visualisations, it’s important to note what this network shows and what it doesn’t show. You may have noticed that large illustrated plates contain more information about those who made them than small illustrations inserted into texts. The Quarterly Journal of Microscopical Science (QJMS) included more plates than any other of the publications we looked at, so the network is largely based on the plates published in one journal. The QJMS was a very influential, and the longest-running, British microscopy journal, so it is an important source, but we should keep in mind that it is only one of many microscopy periodicals and books. Importantly, cheap popular handbooks and children’s books tend to have fewer plates, but these are the publications that were often written and illustrated by women. So, illustrated plates don’t tell us as much as we’d like to know about female illustrators. Moreover, despite all the effort you put into transcribing names, some transcriptions contain mistakes (that’s okay – people make mistakes), and we may have lost some names along the way.

But we can still learn a lot about illustrating microscopy in the second half of the nineteenth century by visualising the names and connections we have found. What strikes the eye is that Tuffen West and W. West are by far the biggest names in the network. Tuffen West is a household name when it comes to nineteenth-century scientific illustrations, and it is interesting to see just how many illustrations he made together with others – more than any other microscopy illustrator in the publications we looked at. Tuffen West was born in Leeds in 1823. His father was a chemist and medical jurist. It was the examination of blood stains in a murder trial that sparked West’s interest in microscopy. He trained to become a surgeon, but an explosion in his father’s lab put an end to his career – he lost his hearing. Luckily, West’s younger brother, who worked as a lithographer in London, offered him work. We found out that Tuffen West had a younger brother called William, so it seems plausible that W. West was his brother William, the lithographer and printer. This would mean that a family business had a big influence on what readers of microscopy publications saw, and what they expected to see under a microscope.

Another interesting aspect of the network is the “Edinburgh connection”. Both Frederick Huth and W. H. McFarlane/McFarlane & Erskine were based in Edinburgh, and for a long time they seem to have been the main printers of plates for the London-based QJMS. We don’t know yet why the journal preferred the Edinburgh printers to more locally based printing houses, but we may find out more by reading the QJMS more closely or consulting the archives of the Royal Microscopical Society, which was associated with the journal. In any case, the Edinburgh connection demonstrates that making microscopy illustrations often required illustrators, engravers and printers to work together remotely.

In our next blog post, we’re going to have a look at the type and number of illustrations in microscopy publications, so stay tuned!

Worlds of Wonder on Zooniverse